On Monday, May 15, the California Gamma Chapter of Tau Beta Pi at Stanford University hosted Stewart Butterfield as part of the annual Distinguished Speaker Series “to share the voices of leaders in the technology industry with the Stanford community.” Butterfield is founder and CEO of Slack Technologies and co-founder of Ludicorp, the maker of Flickr. 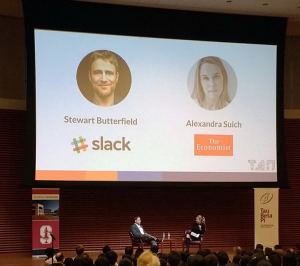 The event was free and open to the public. Butterfield was interviewed by The Economist’s U.S. technology editor Alexandra Suich. The image above was taken at the event and posted to Twitter by @SenseiHub.

There are 12 Tau Beta Pi members that have been named to the 2016-17 Capital One Academic All-District Men’s At-Large teams: (See the full list)

Graduate student Keyou Mao, IN A ’20, has received the 2017 Purdue College of Engineering (CoE) Outstanding Service Award. According to the blog post, the award “recognizes Keyou’s mentorship and community-building among graduate students in the School of Nuclear Engineering and the CoE, as well as his leadership and dedication to a variety of campus student organizations including Tau Beta Pi and Institute of Nuclear Materials Management.”

Mao is pursuing a Ph.D. in nuclear engineering and serves as an advisor to the Indiana Alpha Chapter of Tau Beta Pi.