Several chapters and members of Tau Beta Pi are recognizing today’s anniversary. The Tampa, FL, alumni chapter is celebrating with an evening social at the World of Beer.

On May 31, the California Epsilon Chapter of Tau Beta Pi at the University of California, Los Angeles, initiated the new dean of the UCLA Henry Samueli School of Engineering and Applied Science during their spring initiation. Jayathi Y. Murthy, Ph.D. (CA E ’79), became the seventh dean on January 1, 2016. Dr. Murthy was previously chair of the department of mechanical engineering at the University of Texas at Austin, and held the Ernest Cockrell Jr. Memorial chair in engineering. 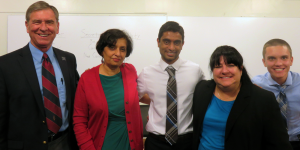 Adam J. Zimmerman, OH E 2017, was one of four summer interns highlighted by R.E. Warner & Associates, Inc. Zimmerman is a member of the 2016 Summer Internship Program. According to the announcement, “interns provide invaluable assistance over the summer months by participating in project design, fieldwork, networking events as well as by gaining exposure to both executives and mentors.”

Zimmerman is majoring in electrical engineering at Cleveland State University (CSU). He is the incoming vice president of the OH Epsilon Chapter of Tau Beta Pi and fence Sabre on CSU’s Fencing Team.